Difference Between: Effect vs. Affect

Effect is a noun that means ‘result, consequence of change’ – e.g. cause and effect. Affect is a verb that means ‘influence, make a difference to’ – e.g. The accident affected her health. We confuse the spellings of these words because their pronunciation and meanings are very close. Simple rule: Effect (End result) vs. Affect (Action). 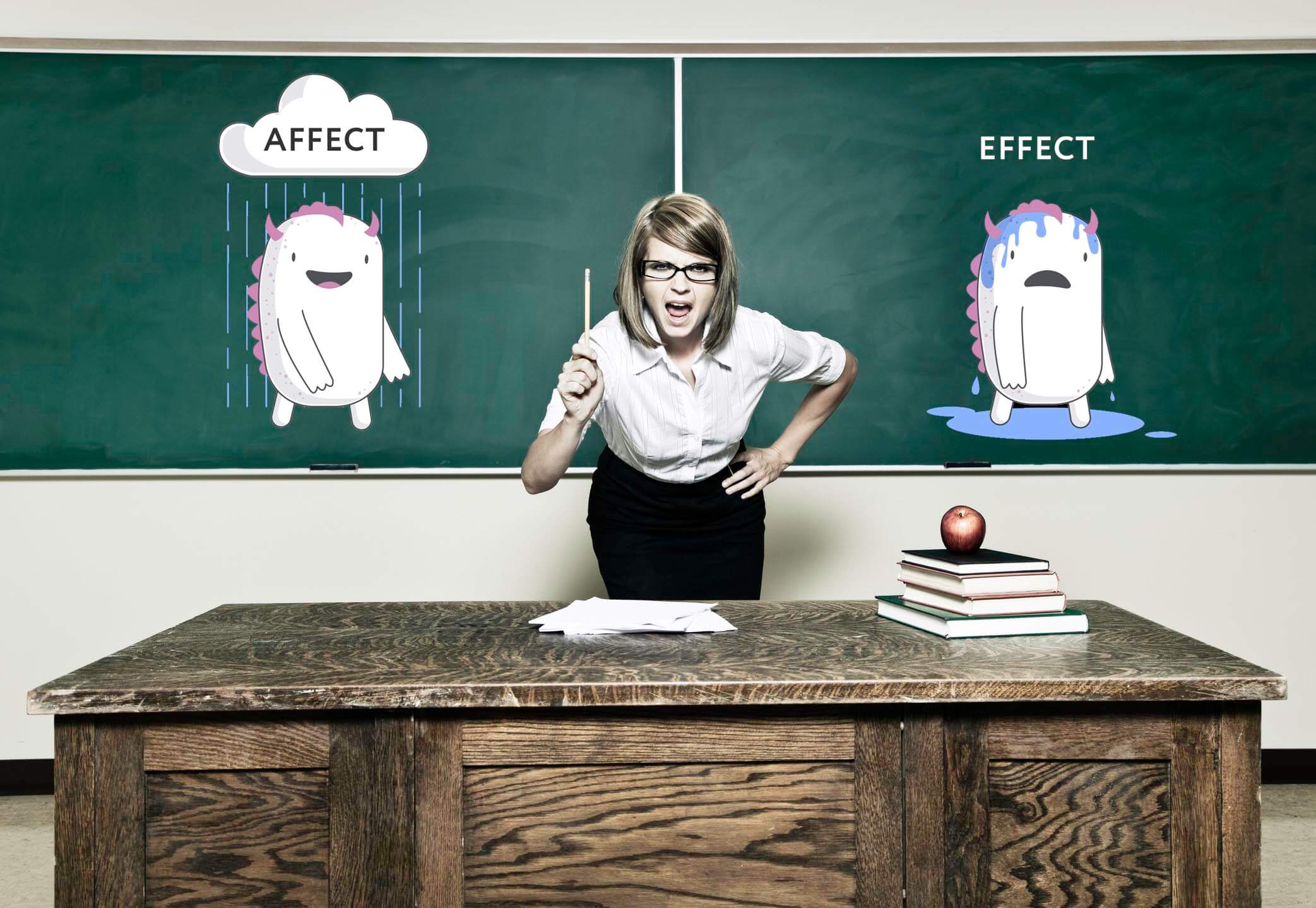 This is the easiest rule to remember the difference between effect (noun) and affect (verb).

Ask yourself: Is it an end result (noun) or is it an action (verb)?

In many situations, we can choose to use effect (noun) or affect (verb) to express the same thing. To do this, we need to change the sentence construction. Both words can be used in past, present and future tenses, and to express a positive or negative.

What does effect mean?

Effect (noun) means: ‘the result of a specific influence or change’.

Set expressions: come into effect, have an effect on/upon, take effect, in effect, for effect.

Additional meanings: Special effects are visual and audio features in a movie that make a stage scene appear like real life. Effects can also be used in a formal situation to mean ‘someone’s personal possessions’.

Examples with effect (noun) in a sentence:

Watch out for a determiner or quantifier in front of effect to make sure it is being used as a noun. For example, an effect, the effect, any effects, some effect, the desired effect.

What does affect mean?

Affect (verb) means: ‘to influence or cause a change’.

Set expressions: be affected by (something/someone).

Additional meanings: Affect can also formally mean ‘to pretend or imitate’ as in: She affected a northern accent.

Examples with affect (verb) in a sentence:

Most of the time, we can assume that affect is being used as a verb. It is an action so you will not see ‘a, an, the’ before it in the sentence. It is very rare that we use affect as a noun. This is only done in specific medical language (psychology / psychiatry).

Exceptions to the simple rule

Effect as a verb

As a verb, effect means: ‘to bring into existence or put into operation.’

For example: The Prime Minister is determined to effect the will of the people.

Affect as a noun

As a noun, affect refers to: ‘a display of emotion via facial, vocal, physical expressions.‘

This is only used in a medical (psychology / psychiatry) context and is very rare in English.

For example: The depressed patient presented with a melancholy affect. (The patient appeared to be sad)

Try these exercises to test your understanding of the differences between effect and affect. There are a couple at the end that deal with ‘exceptions to the rule’ so watch out for these!