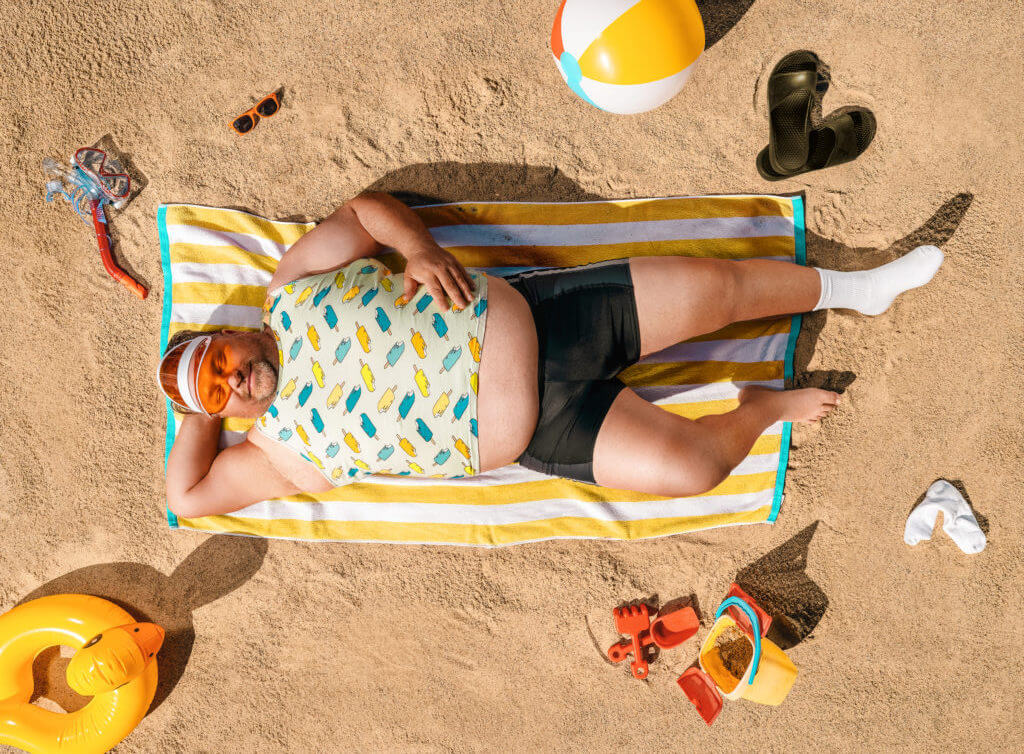 In this study guide, we will walk you through all the adverbs of frequency with examples of how to use each of them in a sentence. Don’t forget to check out the exercises at the end to test your understanding!

What you will learn: (quick nav links)

What are adverbs of frequency?

We use adverbs of frequency to say how often we do things or how often things happen. These come in two types – definite vs. indefinite.

There are adverbs that describe definite frequency (we know exactly how often something happens) such as: weekly/every week, daily/every day, or yearly/every year. For example, John plays tennis weekly or I go to the shops every day.

Then there are adverbs that describe indefinite frequency (they give us an idea about frequency but don’t tell us an exact time frame) such as: always, usually, occasionally, or never. For example, He usually sits at the front of the classroom or I never listen to rock music. 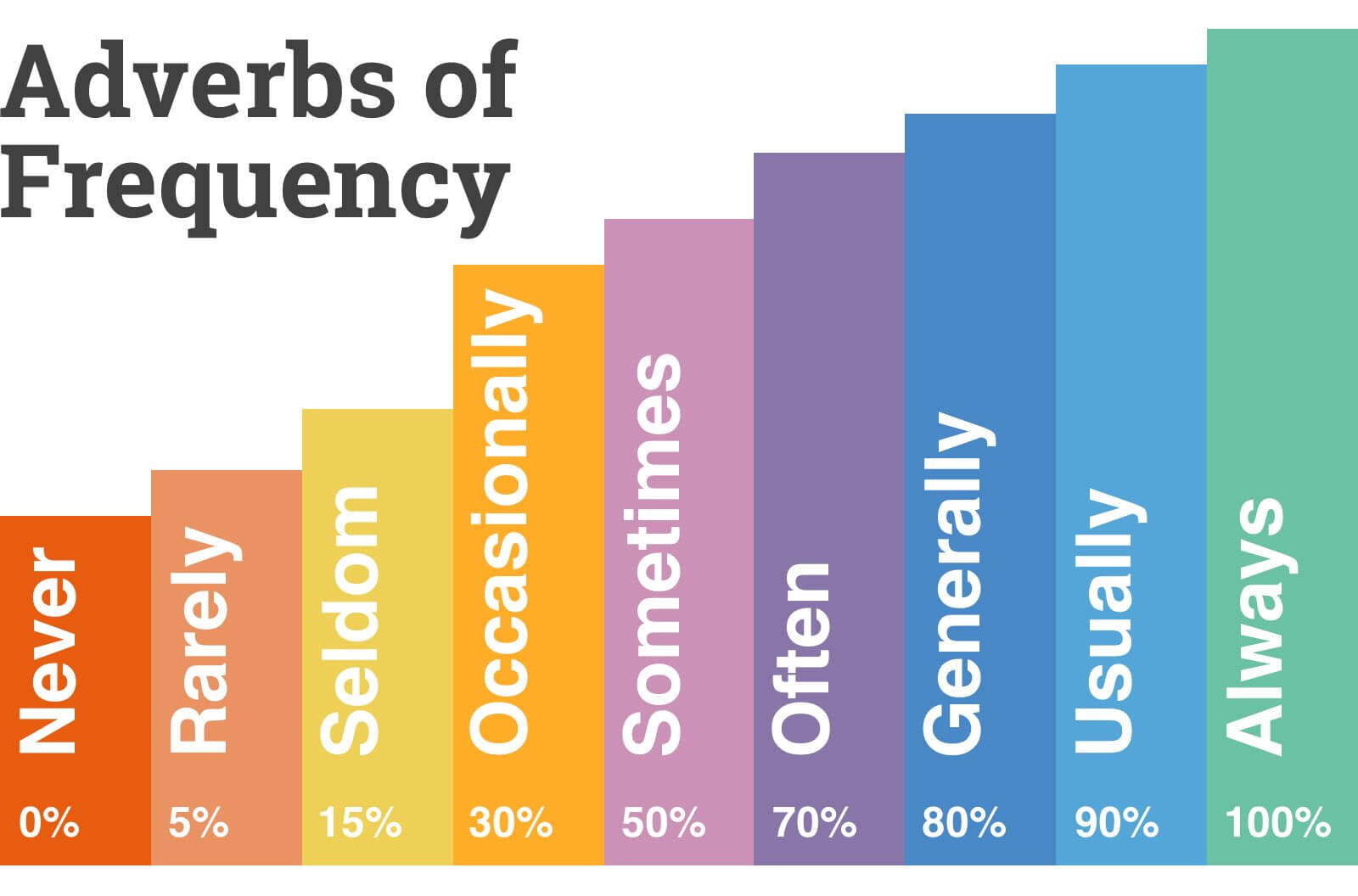 Word order can be tricky with adverbs. Where do adverbs of frequency go in a sentence? At the beginning or the end? Do they go before or after the verb? Let’s take a look at some of the rules!

Most adverbs of frequency go in the middle of a sentence, before the main verb:

Subject + adverb of frequency + main verb
e.g. We usually go to the cinema on Saturdays.

Basic statement: We go to the cinema on Saturdays. If I want to let you know about the frequency (how often) we do this, then I need to use an adverb. The main verb is ‘go’, so we put the adverb before this.

Here are some more examples:

When using an adverb with the verb ‘to be’, you need to be careful with the word order because the adverb of frequency comes after it (not before!):

Subject + to be + adverb of frequency
Here are some examples:

Beginning of the sentence
Some adverbs of frequency can go at the beginning of a sentence:

Adverb of frequency + subject + main verb
The adverbs that can go at the beginning of a sentence are: Frequently, generally, normally, occasionally, sometimes and usually. Notice how these words are followed by a comma in written English.

Watch out for mistakes with always, hardly ever, rarely, never and seldom because these adverbs cannot go at the beginning of the sentence in Modern English. E.g. Rarely I work late = incorrect. ‘Rarely’ needs to go before the main verb. I rarely work late = correct. Exceptions can be found in older English and in literature: e.g. Seldom would he see her unaccompanied.

Adverbs of definite frequency (e.g. hourly, daily, weekly or once, twice, three times) usually go at the end of the sentence:

To give emphasis, adverbs of definite frequency can sometimes go at the beginning of a sentence:

Always
He’s always calling me on my mobile.
I’ve always wanted to go to Mexico.

Constantly
I’m constantly on trains that break down!
You’re constantly annoying me with your singing.

Continually
We continually heard thunder throughout the night.
He was continually disruptive in class so the teacher sent him out.

Daily
When the weather’s nice, I go for a walk daily.
I try to do exercise twice a day because it helps me keep fit.

We can also say daily exercise or a daily walk, but then we are using ‘daily’ as an adjective (describes the noun), not an adverb (describes the action of the verb). In conversation, Brits often say ‘every day’ (informal) instead of ‘daily’ (formal). Saying once/twice/three times a day is far more common than saying once/twice/three times daily (formal).

Eventually
Harry eventually told his wife the truth about the broken vase.
After walking in the forest for hours, they eventually found the road.

Ever
If you’re ever in London, you should go to the British Museum.
We’ve only ever talked on the phone, never in person.

Frequently
Sally’s attitude to school is poor and her homework is frequently late.
People frequently confuse Anna and Sarah as they look so alike.

Generally
It’s generally hot here in June, but this year it was freezing!
Generally, I prefer vegetarian food to meat dishes.

Hardly ever
Tim hardly ever drinks alcohol.
It does rain in the desert, but hardly ever. 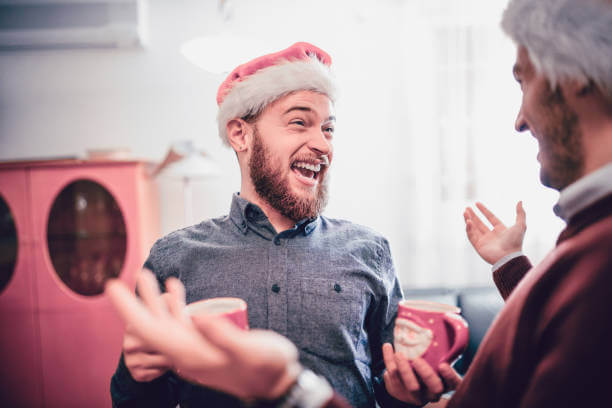 Hourly
He’s on a short-term contract so he gets paid hourly.
The train goes into London once an hour.

Infrequently
My grandmother still attends church services, but rather infrequently.
Alcohol can be good for one’s health when consumed infrequently.

To make questions about frequency, we normally use ‘How often…?’. For example:
How often do you go to the cinema? However, it’s also possible to ask questions with an adverb of frequency. For example: Does he always sit there? Do you come here regularly? Do they ever pay on time?

Later
We’ll come over later, after we’ve been to the shops.
See you later, alligator! (In a while, crocodile!)

Monthly
I pay my phone bill monthly.
I meet up with my school friends monthly.

Next
See you next time.
They planned to come back next year.

Normally
I normally go to the gym on Mondays.
Normally, I walk the dog before work, but this morning it was raining.

There are some idioms in English that can play the role of adverbs of frequency. These include expressions like now and then (also: now and again or every now and then), from time to time, time and again, or once in a while. For example: We still meet up every now and then. I buy a newspaper from time to time. I’ve told you time and again – don’t wear your dirty shoes in the house! It’s good for the garden to have some rain once in a while!

Now
I don’t want anything to eat now, but I’ll have something later.
My uncle used to run the family business, but my cousin is the owner now.

Often
How often do you go abroad for your holidays?
I often go for a jog in the morning.

Native English speakers often use more informal equivalents in conversation. For example, instead of saying “I often go to the cinema with my friends”, they’re more likely to say “I go to the cinema loads with my mates”. Brits usually say ‘loads/a lot’ instead of ‘often’, and ‘much’ can also replace ‘often’, as in: “I don’t go shopping much these days”.

Quarterly
Our financial reports are published quarterly.
We make trips to HQ quarterly to touch base with our managers.

Rarely
I’m currently at uni so I see my parents quite rarely.
My grandma rarely goes out these days.

Regularly
We regularly argue over money.
They attend Church regularly.

When learning adverbs of frequency, you need to watch out for old-fashioned adverbs. For example, most Brits wouldn’t use scarcely ever, seldom or infrequently when talking to friends. Instead we’re more likely to say hardly ever.

Seldom
I seldom read books as I prefer watching TV.
The film version is seldom better than the original book.

Sometimes
We sometimes go swimming in the lake.
Sometimes they come to us, sometimes we go to their place.

Soon
Hannah sold the house soon after she split up with Sam.
See you soon!

Then
We used to be close friends, but things were very different then.
We were both at school then. 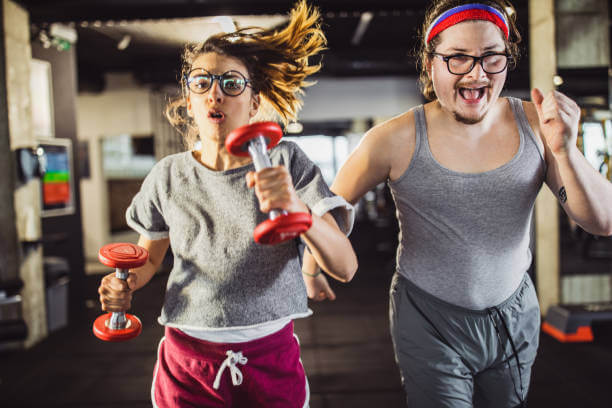 Today
I’m not working today.
She’s been travelling for a week, but she’s arriving home today.

Tonight
Let’s talk tonight.
Are you going out tonight?

We can use adverbs of degree to change the meaning of adverbs of frequency. It is common for native speakers to do this in everyday conversation. Examples of these combinations are: fairly often, quite regularly, rather late, pretty rarely etc.

Usually
I usually have porridge for breakfast on weekdays.
Usually, I have porridge, but today I fancy something different.

Yearly
They update their product catalogue yearly.
We have to renew our insurance policy each year.

Yesterday
Ian got paid yesterday.
I went to the DIY shop yesterday to pick up some supplies.

Yet
I haven’t eaten my lunch yet.
I haven’t seen Anna yet.

Put these sentences in order of frequency (A = most frequent, B = middle frequency, C = least frequent)
E.g. I am usually late = A

Are these adverbs of frequency definite or indefinite? Circle the correct answer.
E.g. every year = definite

Enter the adverb of frequency next to the correct percentage to show the frequency associated with it. The first one has been done for you!

Put these words in the correct order to create a sentence.
E.g. Fish / never / eat / I = I never eat fish.

Put the adverb of frequency in brackets into the correct place in the sentence.
E.g. I eat salad. (always) = I always eat salad.