Relaxed pronunciation is common throughout the world’s languages and occurs when syllables of common words are mixed (or slurred) together to make their pronunciation easier. 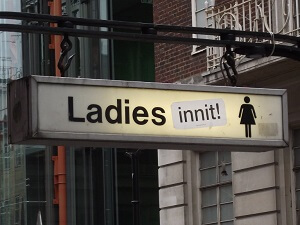 Getting to grips with this aspect of pronunciation is important if you want to understand modern films, music, internet chat and colloquial English used by native speakers. Therefore, it is worth examining where certain informal terms may differ from their formal equivalents.

Where written English tends to be governed by strict rules and spelling norms, greater freedom is afforded to the spoken language. This leads to differences in the English we speak and write, especially in informal vs. formal situations. Conservatives may argue that relaxed pronunciation represents a degradation of the language, a lack of education or simple laziness. However, these forms exist alongside their standard equivalents and do not replace them in writing and formal contexts. Therefore, if confined to informal situations, these non-standard forms are not necessarily bad.

If you have ever listened to a song on MTV or watched a Hollywood film, you will no doubt be familiar with common forms of relaxed pronunciation like: wanna, gonna, kinda, coulda, etc. Words of this type are seldom written down so do not have standard spellings. Note that contractions (can’t, won’t, etc.) are regarded as standard forms in English and do not fall into this category, although they are also used in informal contexts.

Below is a list of relaxed forms in English:

“Wadaya talkin’ ‘bout?”
(What are you talking about?)

“John’s gonna go clubbin’ withem later. Izee?”
(John is going clubbing with them later. Is he?)