Differences between British and American English

When you are learning English as a foreign language, it is important to understand the differences between British and American English. 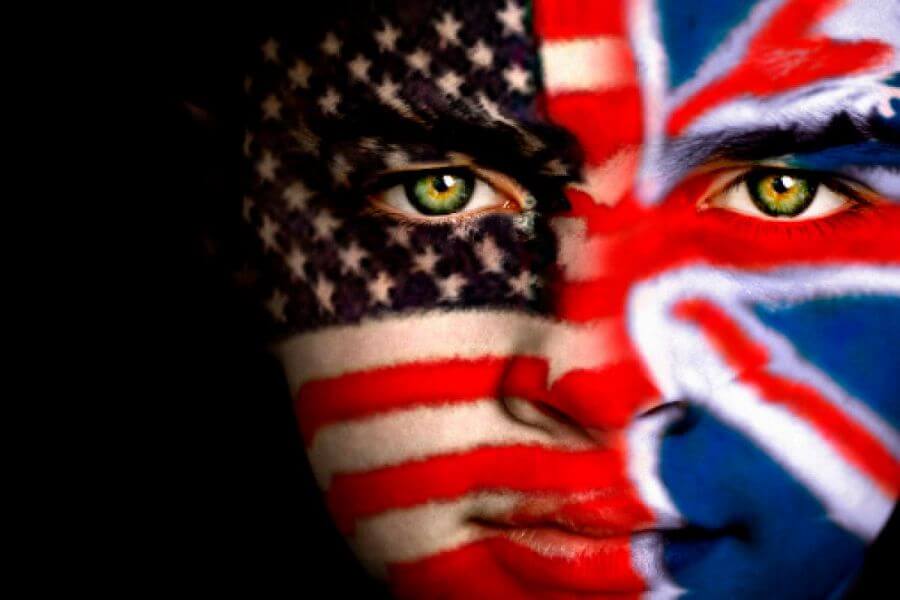 Mixing the two varieties will make your English sound strange and unnatural so it is best to choose just one and use it all the time. There is no “better” or “worse” variety of English and both British and American have their advantages depending on how and where you intend to use the language.

This quote by the famous Irish linguist and playwright still rings true today and various differences between British and American English remain. Native speakers of both varieties have relatively few problems understanding one another, but there are several points at which British and American diverge. Let’s take a look…

The most evident differences between British and American English are in vocabulary. Misunderstandings can arise when the same word has different meanings in the two varieties, for example: “pants” – Brit. underwear, Amer. trousers. So if an American doctor told a British patient to “remove his pants”, he might be a little surprised by the result! The word “chips” also causes problems because in American it means “crisps” (Lays, Pringles, etc.), where in British English it means “French fries” (the ones you get at MacDonalds). In other cases, the languages have different terms for the same thing. Here are some common examples (Brit vs. Amer):

Shop vs. Store
Bill vs. Check
Bin vs. Trash can
Biscuit vs. Cookie
Boot vs. Trunk (of a car)
Car park vs. Parking lot
Lift vs. Elevator
Full stop vs. Period
Pram, pushchair vs. Baby carriage
Engaged vs. Busy

British and American English can use certain prepositions differently as in these examples (Brit vs. Amer):

At the weekend vs. On the weekend
In a team vs. On a team
Tuesday to Friday vs. Tuesday through Friday
Talk to John vs. Talk with John
Different to vs. Different than
Where are you? vs. Where are you at? (informal)

There are also some small differences between idioms in the two varieties (Brit vs. Amer):

Another area of visible contrast is spelling. In 1828, Noah Webster published An American Dictionary of the English Language, in which the spelling of many words was simplified with the aim of making American English more logical in its reading and pronunciation. British English adopted Samuel Johnson’s Dictionary of the English Language of 1755 and thus retained many original spellings from words borrowed into the language. English contains a vast number of words of French origin, the spellings of which are often convoluted and contain additional (arguably superfluous) letters that are not pronounced. American tends to simply words of this kind, where British has left them unchanged.

Here are some common examples of spelling differences (Brit vs. Amer):

English slang is constantly changing and there are some interesting differences between British and American usage. Many Brits use “cool” terms they pick up from American films, adverts and popular music but Americans are less likely to have the same level of familiarity with British slang due to less exposure.

This video highlights some of the differences between slang in Britain and in the USA:

In terms of grammar, British and American English are very similar with just minor differences. These are often visible in the choice of verb or verb form in the two varieties. American English also has a tendency to replace complex tenses with simple ones where possible, for example, present perfect with past simple as in: “Have you phoned her yet?” (Brit.) vs. “Did you phone her yet?” (Amer.). Adverbs such as yet/ever/already/just are commonly used in the past simple in American English and not the present perfect. Take a look at some further examples (Brit vs Amer):

In British English collective nouns can often take either a singular or plural verb form depending on whether the speaker is emphasising the unified concept or breaking it down into individual elements. American English always follows such nouns with a singular verb form. For instance, in the British variety we can say: “My family IS big” (many relatives forming one large group) or “My family ARE big” (meaning your relatives need to get down the gym!). The second sentence would not be acceptable in American English. Other collective nouns that fall into this category are: government, class, staff, team, etc.

Sometimes Americans favour “do” where Brits would use “have (+ got)”. Take a look at the following examples (Brit vs. Amer):

British English is changing under influence from American so you may occasionally hear Brits using the second forms above rather than “have got”. However, Brits would not use American mixed forms like: “They’ve got a new house. They do?” (Brit. Have they?).

There are also noticeable contrasts in the use of regular/irregular verbs, their past tenses and past participles. For instance, the verbs burn/dream/learn/smell/spill/spoil are regular in American but irregular (-ed to -t) in British English. Take a look at the following examples (Brit vs. Amer):

Here is a table highlighting some of the differences in verb forms between the two varieties: 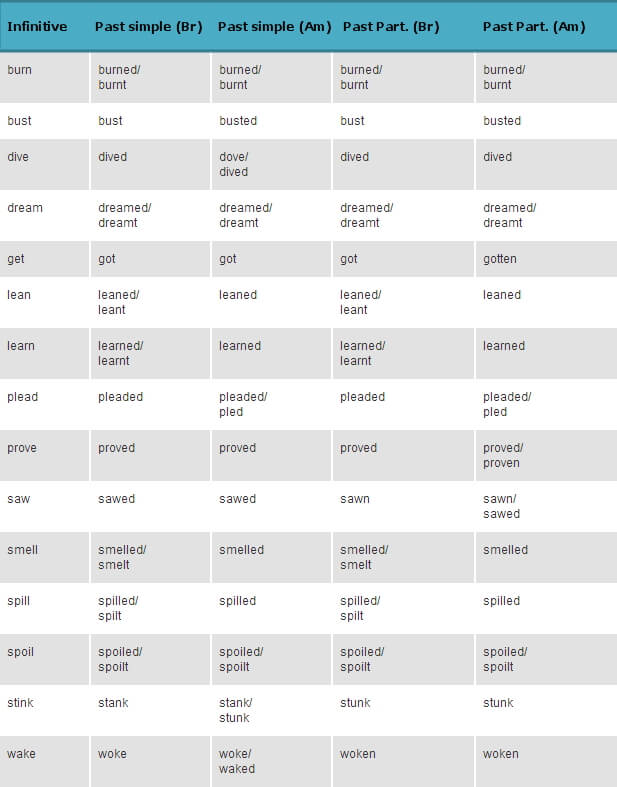 For a more detailed explanation of the grammatical differences between British and American English, click here.

One of the mostly noticeable differences between British and American English is in pronunciation. Each language has its own standard form in addition to numerous regional accents. In England, the first divide is north-south (e.g. short vs. long vowels in words such as: bath, path, grass) and then between counties, cities and towns. A distance of a few miles can make a big difference when it comes to how people speak English. In America, there is a north-south and east-west divide and residents of New York, Huston and San Francisco may speak English quite differently. You can listen to some interesting examples of American accents here.

This informative video explains the principal differences between standard British and American pronunciation:

Over the last few decades, British English has come under increasing influence from American English. This is because the majority of television programmes, films and music are exported to the UK from the States and people pick up words and expressions they are commonly exposed to, thus bringing them into general usage. Conservatives argue this is damaging British English, while liberals say it is a natural process of language evolution and change. Whichever side you are on, the fact remains that American is the dominant form of English in the world and has the greatest influence on its other varieties through the mass media and popular culture.

To be fair, it’s not all one-way traffic and some British expressions have entered American English (among Britpop fans and certain social groups), but for those who are not so familiar with British English, here’s a funny guide.