Russian mistakes in English are frequently based upon confusion between several words that are similar in meaning. 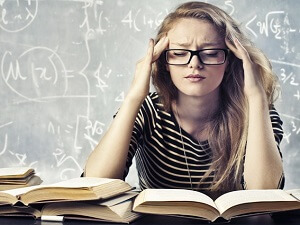 Just because your own language uses a given word in a particular way does not mean that others do the same – this false assumption leads to mistakes. Therefore, it is important to examine where your native language differs from that which you are learning.

Before we take a look at the following list of commonly confused words, you may like to read: Russian mistakes in English: confusing words 1.

Confusion between these words probably originates from the Russian term “учить”, which can mean both “teach” and “learn” depending on the context. In English, these words are distinctly different, with “learn” meaning what a student does (изучать/научиться что-то делать) and “teach” describing what a teacher does (преподавать). Interestingly, in certain northern dialects of English, you can occasionally hear phrases like: “That’ll learn thee/you!” (That will teach you!). This resembles the Russian closeness of the two notions.

This distinction is often one of theory vs. practice. “Study” is associated with the acquisition of academic knowledge through books, lectures, seminars and so on. “Learn” is better thought of as a practical process involving the acquisition of specific skills or parts of a subject. In the context of language, we could use both terms.

Learn: to drive, to ski, a list of words, to speak, how to make a website, from your mistakes
Study: at the library, sociology at university, for your driving test, a map in great detail

As you can see from the example above, you LEARN to drive but STUDY for your driving theory test. If you said that you “studied driving” it might mean that you knew a lot about the subject in theory as an academic discipline, but could not actually drive a car!

Russians tend to make mistakes here because of the word “полезный”, which can mean both “useful” (e.g. tools) or “healthy” (e.g. food). In English, there is a clear distinction between the two concepts of полезный. The term “useful” (lit. full of use) refers to things or ideas that possess a practical application, i.e. that are of use to someone. This has nothing to do with health in English and we cannot say that one or another type of food is “useful” unless we are using a banana as a tool to accomplish a task! If you had a hole in your rowing boat and used a banana to plug that hole, then it would be “useful” but in all usual contexts it is just “healthy” (i.e. it is good for your health).

The distinction to be made here depends on the type of situation being described. If you are talking about дарить подарок, then it is definitely “give”. However, if a soldier has returned as a war hero, then you could say “present” about the giving of a medal or award (награждать).

Russian mistake: “My mother PRESENTED me a new dress on my birthday.”

This sounds unusual because the word “presented” suggests that it is some kind of grand ceremony and the speaker was handed the dress on a big red cushion in a royal palace! If you are talking about a normal present (noun), don’t use “present” (verb)! Here are some further examples:

Give: a birthday present, a souvenir, a gift to a friend, some money
Present: a medal, an award, an Oscar, a gift to the Queen, a commemorative flag

Another pair of words to watch out for is rest vs. holiday. Both words can be translated into Russian as “отдых” depending on the context. In English, “rest” is a state of relaxation with little or no physical or mental exertion. On the other hand, “holiday” is a day-off, a relaxing break from work or a festive period (lit. holy day). Confusion arises when Russians use the word “rest” to mean time spent abroad relaxing by the beach or pool.

Russian mistake: “This year I want to go to Spain for a REST.”

Although the speaker will be resting/relaxing while away, he or she is actually “on holiday”. It is better to use “rest” to mean “take a break from work” as in: “I’ve been working all week and I need a rest!” If you speak American English, use “vacation” instead of “holiday” in the context of a relaxing trip abroad.

It is worth clarifying your understanding of these two words in English. Generally speaking, “all” is “все” (whole) and “every” is “каждый” (individual). Russians sometimes confuse expressions like: “all the time” (все время) and “every time” (каждый раз).

Try watching this short video to clarify the distinction:

Russian has separate words for “nature” and “countryside” but the problem arises from the generalisation of “природа” to mean both. For example, you can say: закон природы (law of nature) and поехать на природу (go to the country(side)). You cannot use “nature” to mean “countryside” in English because it is more associated with ecology and science – i.e. it is too academic.

Russian mistake: “I like to relax in the NATURE near my city.”

Native English speakers would use “country(side)” in this context and in most others where we are referring to “the open space outside a city”. Russian can also use words like “загород”, “дача” and “деревня” to express the idea of going out of town. In English, we tend to use the general term “country(side)” (we don’t have dachas and seldom visit villages!).

Problems can arise with this pair of words, although there are distinct equivalents in Russian. The word “stand” is “стоять” and “stay” is “останавливаться/не уходить”. The second translation of “stay” may be the one that causes difficulties here as it has associations with standing still and not moving anywhere.

Russian mistake: “I was STAYING at the bus-stop for over an hour!”

This example sentence would mean that the speaker was living at the bus-stop or at least bedding down there for an hour with a pillow and teddy bear! Here, we need to empathise that the person was in fact standing.

STAY and LIVE
This distinction is a relatively easy one to understand. In English, the term “live” refers to a prolonged period of residence (usually months/years), whereas “stay” is short-term. Use “stay” when talking about a hotel unless your wife has kicked you out and you have been forced to spend months there!

Russian mistake: “When we were on holiday in Spain, we LIVED in a hotel by the beach.”

KNOW and FIND OUT and RECOGNISE

These words are frequently mixed up by Russian speakers of English. The problem is the overuse of “know” (знать) to mean “find out” (узнавать, выяснять) and “recognise” (узнать, опознавать). English lacks Russian’s complex system of inflections and cannot use the root “know” here to create the other two words. We therefore, have three separate and quite dissimilar terms. So, to clarify:

The speaker means “found out” but the use of “knew” would indicate that the person has amnesia and no longer remembers anything about the website – the association being that they knew about it then but don’t now!

Russian has the terms “словарь” and “словарный запас” but for some reason many Russians still make the mistake of saying “vocabulary” instead of “dictionary”. Remember that the book full of words is a dictionary and the collection of words in your head is your vocabulary!

Some Russians, especially those within the education system, often talk about writing “compositions”. This sounds unusual in English as the association here is with classical music compositions or possibly those in the art world. The Russian word “сочинение” would be better translated as “essay” or “mini-essay” (depending on length) and “assignment” in American English.