Our mother tongue plays a key role in the errors we make when learning a foreign language. 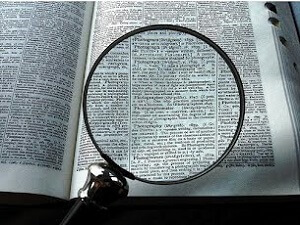 Developing an understanding of the similarities and differences between Russian and English helps us avoid mistakes and learn correct constructions. Russian mistakes in English are logical, predictable and entirely natural. It is wrong to view these mistakes as inherently bad – provided that we learn from them, they can help us to improve and progress.

Possibility = Fact or state of being possible (capable of happening), something that might be true
Example: “There is a possibility we might go to Spain next month.”

Opportunity= Made possible through luck or favourable circumstances, a good chance for advancement
Example: “I have been offered a great job opportunity in Spain.”

The problem here is that the Russian word “что” can be translated as either “what” or “that” depending on the context. English “that” can also be “чтобы”, “который”, “’это”, “тот”, etc. in Russian.

Russian mistake: “You can do anything WHAT you want.” (correct: that or omission)

The word “what” is often used as an interrogative pronoun in questions but it can also act as a fused relative pronoun (meaning: “that which”). Compare these usages:

The first example is a straightforward “wh- word” question. In the second example, the phrase “what you did” refers to the person’s hairstyle (the thing being liked), substitutes for it in the first part of the sentence and cannot be omitted. This mid-sentence use of “what” can create confusion with the conjunction “that” (similar in meaning to “which”). The word “that” can be omitted where its absence does not cause ambiguity.

“He decided (THAT) he wanted to become a doctor.”
“I didn’t realise (THAT) he was talking about Spain.”
“Do you want this hammer? Yes, THAT is the one I need!”

This distinction is an easy one to make. Homework is what children are given to do at home after school and housework is physical work done around the house (ironing, cleaning, washing up, etc.).

In certain contexts, the Russian word “стать” can translate as both “become” and “start” (doing something). Compare these sentences:

The distinction to be made here is between whether you are talking about initiating a process (start) or changing state/situation (become).

Russian mistake: “I BECAME to play the piano when I was six years old.” (correct: started playing)

Russian speakers like the word “variant” because it appears similar to the Russian “вариант” but overusing this term sounds unnatural. In English, “variant” is usually limited to formal or scientific contexts, e.g. “There are many variants of English spoken throughout the world.” (type, kind). Other more common translations of “вариант” would be: option, version, type, and alternative.

Russian mistake: “I don’t know which profession to choose because I have too many VARIANTS.” (correct: options)

Of course, Russian also has many similar terms – версия/version, тип/type, опция/option, etc. – but assuming that “вариант” always translates as “variant” in English will lead to frequent mistakes. This word is rare in modern English.

British and American English sometimes differ in their use of these words and Russian speakers may get confused by this. Grammatically speaking, “good” is an adjective and “well” is an adverb. So you can say: “I speak good English” (what type of English? – good) but also “I speak English well” (how do you speak? – well).

Some confusion may also arise when using verbs like: be, seem, appear, sound, look, feel, smell and taste. These words are followed by adjectives and not adverbs because we are talking about the subject rather than the action itself.

Interestingly, this example also highlights another exception – the adverb “well” can also be used as an adjective when describing a person’s health (i.e. not ill). So the mistake above would sound strange because it might mean the man looks healthy in the new suit.

English and Russian can use prepositions differently when referring to periods of time. Generally speaking, “during” refers to what happened within a time period and “for” refers to the whole of the period. For example:

“During the Second World War, many people lost their lives.” (through, at various points in)
“WWII lasted for six years and 1 day.” (whole period, entire duration)

Russian mistake: “I studied at university DURING 5 years.” (correct: for)

Difficulties may arise here because Russian can use the word “как” for “how/like/as”. Compare these examples:

“As” and “like” can also be used as conjunctions to express the meaning “in the same way that”. The latter is used more in American English and informal contexts.

SINK and DROWN / SAIL and SWIM

This issue here is with an animate/inanimate distinction that exists in English but not in Russian for these terms. The words “sink” and “sail” are used about inanimate objects like ships where “drown” and “swim” are used for animate objects like people and animals. Russian generalises here by using two words: “тонуть” (sink/drown) and “плавать” (sail/swim).

Russian mistake: “Be careful! If you can’t swim, you will SINK!” (correct: drown)