Difference Between: Further vs. Farther

Further (fɜːʳðəʳ) and Farther (fɑːðəʳ) are both adverbs (words that describe actions) and adjectives (words that describe things). They are also the comparative form of far, which means ‘to be at a distance’. As a result, further and farther mean: ‘to a greater distance or degree’ – e.g. The hikers were so tired, they couldn’t walk any farther or James decided that if he had further problems with the car, he would sell it. 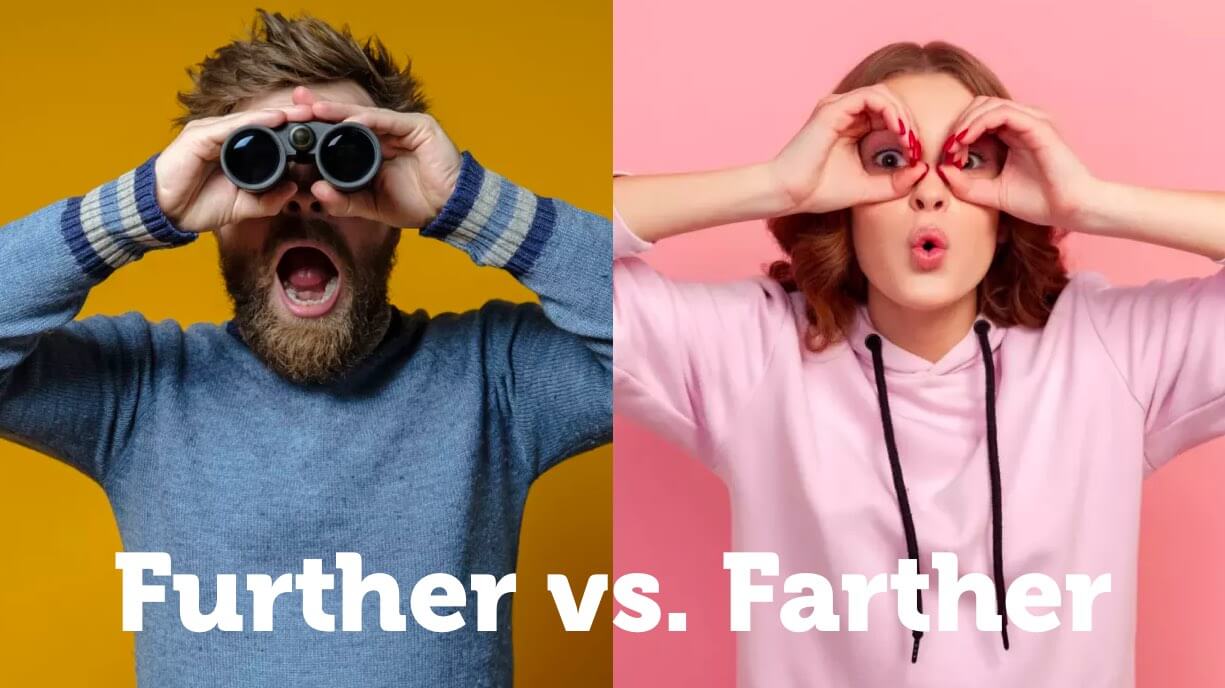 Most of the time, in British English, when using farther and further as adjectives and adverbs, there is no difference between these words. We can say:

The first sentence is correct because 5 miles is a physical distance that we can measure.

In American English, they use further to talk about figurative and symbolic distances:

The first example is correct because we cannot measure the distance the teacher describes – the progress of his studies is not a physical distance but a metaphorical one.

The key to remembering the American English rule is to ask yourself: is this a physical distance that we can measure? If it is, use farther. If it is not, use further.

There is also a difference in how we pronounce further and farther in British and American English. In British English, the /ur/ part in further rhymes with the /ir/ in bird, whereas the /ar/ part in farther rhymes with the /ar/ in car. The /er/ part at the end of both words is like the /a/ in about. American English speakers stress the /r/ in the /ur/, /ar/ and /er/ parts harder than the British do.

Thinking about physical distances and metaphorical differences can be complicated. Sometimes the unit of measurement (such as 5 miles) is not present in the sentence:

Farther is still correct because we can imagine that the distance is in kilometres or miles.

Alternatively, we might be talking about something that measures time and not distance.

But what if you are writing a report? Do you think of it in terms of time or distance? For example:

Here, further could relate to the time it takes to write the report – it is not a physical distance but a measurement of time, so we need further. But could we also think of the report in terms of the words written, pages, printed copies? Are these not physical distances? The short answer is no. The distance must be a number, such as metres, centimetres, kilometres, yards or miles. So, only further is correct in this instance in American English.

In British English, you don’t have to worry about the above questions – farther or further are correct in all sentences. That being said, we do use further much more in British English than farther.

Both details and information are nouns (things), so we must use further as an adjective to describe them. Farther is not possible here.

The above tip is also true if we think about further as a verb, which means ‘to make progress with something or to build on something’:

This rule also applies to American English. If further is a verb, and you can replace it with phrases such as ‘make progress with…’ or ‘build on…’, then always use further.

The fact further is a verb also means that it can appear in different forms – e.g. Helen furthers her education by attending night classes or Watching YouTube videos is furthering Sandy’s guitar playing.

If we change the word in any way, we can only use further:

The bottom line, in British English, is that if you use further, you will always be correct!

What does further mean?

Set expression: Further afield, further down the road, cannot be further from the truth, take something further, go further, on further inspection.

Examples with further in a sentence:

What does farther mean?

Set expressions: In British English, we advise you to avoid using the set expressions in further with farther, even if they are technically correct. This is because you will find some expressions that only sound right with further.

Examples with farther in a sentence:

You need not look any further for a chance to further your knowledge of further and farther. Try the exercises below! The questions concern British English only (unless otherwise stated).